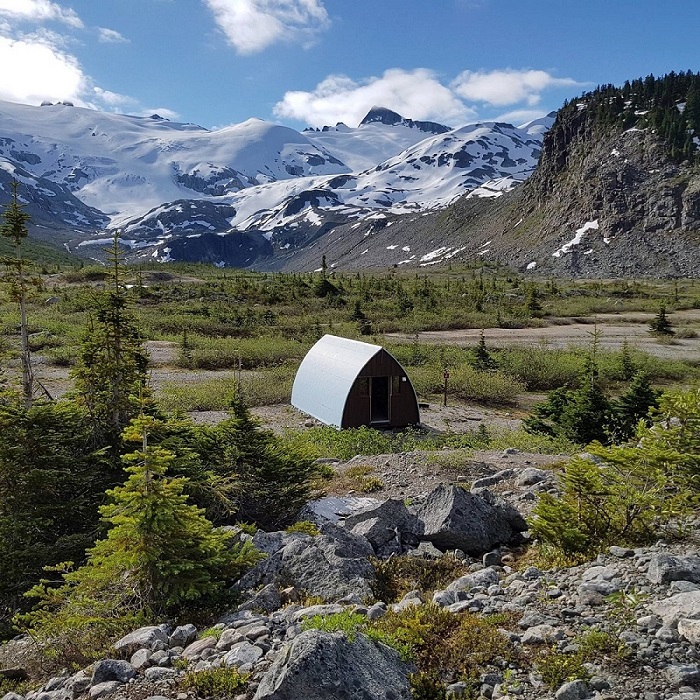 This small hut on the eastern shore of Garibaldi Lake, in Sphinx Bay, sleeps about 10 people comfortably (built 1969). Since it is in Garibaldi Provincial Park, overnight visitors must purchase a wilderness permit. The hut is open to non-commercial users only.

The hut is not heated. It has an outhouse and a solar-powered light, and drinking water can be taken from the creek or lake year-round (sometimes by breaking the ice). For more information, see the VOC Wiki.

Garibaldi Lake is reliably frozen at least from February through April, and this provides the main access to the hut. Park at the Rubble Creek trailhead and follow the trail to the lake. From the outflow, cross the lake south-eastwards (bearing 111°). Whiteout conditions and high winds can complicate the crossing, so bring a GPS or at least a compass. The hut is not visible from the lake: it can be found 70 m from the lakeshore behind a small moraine, just north of a large creek. The total distance is 13.5 km, with 1100 m elevation gain.

Despite the recent flooding at Garibaldi Lake that closed the lakeside campground, Sphinx Hut seems to have stayed dry the whole time (same goes for the outhouse). The bugs were quite bad, however, and the gravel flats just S of the hut were flooded. There is a mouse living in the hut and it's difficult to keep the swarms of mosquitoes out.
Aug. 7, 2022

Everything looked in good working order in the Hut. It was my first time there so I have nothing to compare it to but nothing stood out to me. No issues. The mice are still there though but that seems inevitable!
July 25, 2022

Pack-rafted to the hut, found it in excellent condition. Could benefit from a fly screen on the top window, even better if there was another mosquito-proof vent down low too. We were choosing between mosquito hell outside and a sauna inside for the evening. One friendly mouse causing a commotion in the night. Solar light and hut crocs were very much appreciated
July 24, 2022

Trail was good, still a lot of snow cover. We took the Castle Towers trail to approach the hut from the north. However, after dropping into Gentian pass, we decided to turn around and make a day hike out of it. We made this decision due to lack of experience with glacier travel within our group.
So, we did not make it to the hut or the sphinx glacier.

Great weekend up at Burton Hut. Hut appeared to be in great shape and thanks to the previous party for bringing up mouse traps as we did not hear any mouse activity during our stay.

Snow was consistent for skinning/skiing above the first switchback on the trail (although thin in places and the snowline appeared likely to climb quickly), and the lake was still in good travel condition with no sign of melting even around the creeks yet. We had some skin glopping when crossing the lake in the afternoon in bright sun and we found it quicker to remove skins and tour across without them. Our plan was to attempt Mt. Carr and Castle Towers but unfortunately whiteout conditions in the alpine made us turn back at the upper lake just before getting on to the glacier.
April 10, 2022

Able to drive to the parking lot at the trail-head, hiked until the 4km mark and put our skis on. The lake was still solid. We heard there was some mice in the cabin from recent reports so picked up 4 mice traps on the way. Caught 2 our first night, second night no activity. We left the 4 (clean) traps up there, cheese seemed to be the preferred choice. Took a couple empty butane canisters out with us, still a 4L white gas canister left to come out. Our 3rd trip to the area, been 3 years since our last. The new outhouse was a nice improvement, and was in great shape.
March 30, 2022

On our way up, we were shocked to see Lesser Garibaldi Lake half defrosted already. When we started to cross Garibaldi Lake, we could already see patches of blue shimmering through. There was little snow left on the lake, and the top layer was thawing. We tried to zig-zag around the blue patches, but a third into the lake, we were sinking 10-15 cm deep with our snow shoes and got wet feet. We were sad not to make it to the hut but wanted to be on the safe side and turned around. Gladly, we also made it back safely.
March 28, 2022

Road to trailhead had no snow. Left the rubble creek parking lot on March 20th at 10am. Had to walk with skies on our bags for just under 1km, about 45mins. Switchbacks were in good condition up and down, not much ice on the trail. Saw a few other parties on our way up. Lake was completely frozen, clouds were pretty low an visibility was moderate most of the day. Made it to the hut at 4:30pm. We were the only party at Burton hut Sunday night. Hut was clean, but lots of mice, we used our own stoves, there were a few pots in the hut we used. It snowed about 15cm overnight, went over to a small hill NE of the hut, dug a pit (there is a MIN posted on Avalanche.ca). Left the hut at 11:30am, made it back to the car at 3:30pm, had to walk out about 750m, didn't see any other parties Monday. Snow was sticky on our trip back across the lake, we used ski wax and it was a life saver!!!
March 21, 2022

Deep snow at some spots, doors are not closing properly  Ondrej P

Road to trailhead is clean, microspikes recommended at around 3km mark, snowshoes needed starting from Garibaldi lake. Snow is quite deep in some areas although manageable. Hut is in good condition but doors are not closing properly due to an ice buildup. I've tried to clean it up a little with limited tools but it's frozen through. Left small spare gas cannister at the hut for emergency use.
March 6, 2022

The road to the trailhead is mainly snow free. Just a few patches of ice but any car can make it.
Trail to the lake is 99% compact snow were micro spikes are better than snowshoes.
There is about 50cm of snow on the top of the ice on the lake.
Ice thickness is over 16cm (this is the length of my ice screw and we didn't get to the water)
We made very good tracks leaving from Battleship Islands.
The hut is in pretty good shape, no damage to report.
Although the cooking are isn't very clean.
We packed up a few empty gas containers that were empty and some leftover food that have been left behind.

the snow on the lake was really deep. We didn't bring our snow shoes and had a very physical hike to get the the hut.
Feb. 9, 2022

Despite it being over-booked, we were the only group there! Tons of whumpfing on the flats so we stuck to low angled runs. No evidence of mice at the hut currently. Coleman stove emitted a weird brown fume from the second element (even when closed) so we stuck with the stove we brought. Door can take some finesse to close properly. Otherwise everything in great shape! A few bare spots on the lower trail but overall great coverage.
Feb. 6, 2022

Garabaldi lake trail was very icy on the way up which made for an interesting skin up to the lake. Once we got to the lake it was much easier and finding the hut was no problem. We did a small tour up guard mountain which was surprisingly nice and then got back to the hut. The hut was in good condition the only thing would be to bring your own liquid fuel for the stove. The next day it had snowed overnight and it had snowed all the way down to the car which made for easier skiing down. There were still some spots with water flowing over the trail that were uncovered but otherwise there was snow coverage to the car.
Jan. 30, 2022

A comment on a South Coast Touring post about the Rubble Creek trailhead for Garibaldi Lake claims that the road is now plowed all the way to the actual parking lot. That would fix the access problems discussed in recent reports.
Jan. 16, 2022

I joined Joanna's trip. My sincerest thanks to which ever kind soul donated the bottle of whisky up there; the taste of home is especially welcome when it is found unexpectedly, for free, of a level of quality I can't afford to buy in Canada, and shared in good company in the mountains. There is still plenty left to warm the cockles of a few more visitors. Note on Colman stove: you must light both rings, you can't isolate aux burner.
Just to clarify Joanna's observation that "the road is plowed", the road was properly plowed to the BC hydro turn off. The road was further plowed to the commune but to a lesser extent. You could drive on it, but we were somewhat concerned about getting stuck on that section of road and so didn't drive all the way up it. The commune people were driving up and down it on a snow mobile, to give context. Beyond the commune no plowing had taken place. We dug out a parking spot 100m past the hydro site and parked for two days without being towed/ticketed.
Jan. 10, 2022

Powder is no more  Joanna Gower

We got a late start Saturday due to some car troubles and ended up reaching the hut on Sunday morning.

The road was plowed, lake was frozen and the trail was covered in powder on the way up Saturday.

The hut was cozy and we even got the old Colman stove working! Left some white gas to replace what we used and enjoyed a beautiful day chilling at the hut.

On our way out Monday morning the trail was quickly turning into slush.
Jan. 10, 2022

The road off the highway was only plowed for 300m, until the gated turn-off to the Daisy Lake dam, January 6th. The snow that was plowed, was plowed into a barrier blocking further vehicle access to the Rubble Creek trailhead. There are many signs indicating “no parking,” including at the chain up area S on the highway, as well as the first section of road at the Roe Creek/Chance Creek turnoff, which is plowed for cat-skiing operations. We ended up skiing elsewhere.
Jan. 6, 2022

Some skiers recently visited Sphinx Hut by crossing Garibaldi Lake (the standard winter route). The hut, the outhouse, and the new solar light were all in good condition. Apparently it was super cold though, even inside the hut, since it's not heated. Ordinarily BC Parks now plows the Rubble Creek parking lot, but they're behind this year. Instead, you have to turn off Hwy 99 towards Rubble Creek and drive until the road isn't plowed (at the turnoff to the meditation/retreat centre), then dig out a spot for your car on the side of the road that doesn't impede the plow or any other traffic.
Dec. 30, 2021

Parking lot is about half full. Trail to the lake is busy even mid-week. Lake still very frozen. The outhouse door does not close fully letting in some snow and the pit is nearly full. The catalytic heater is no longer at the hut. The solar lighting is working well. The hut door is a bit loose and lets in snow during a storm.
April 1, 2021